Laurie Kilmartin Wrote a Book! And its Awesome! 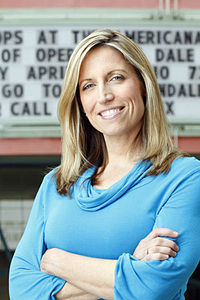 You don’t get to be a New York Times Bestselling Author for nothing! You gotta earn it! And longtime friend of the Comic Strip Live! Laurie Kilmartin certainly has!

Along with Karen Moline, Alicia Ybarbo and Mary Ann Zoellner, Laurie penned the hot new title “Sh*tty Mom: The Parenting Guide for the Rest of Us,” released earlier this month by Abrams Images. Laurie currently lives in Los Angeles where she is a staff writer for TBS’ CONAN, but we always love it when she comes back to visit us when in New York.

Filed under "stand up comedy"

Our Comedians Are Amazing Tweeters

Are you reading this blog? Then you are probably on Twitter too. And if you are on Twitter, do the right thing and FOLLOW US!
But not just us, here is a list of some of our talent who are AMAZING on Twitter. Check em out!

“Was in line at Apple Store all night Thursday night. Was the only one there for a charger.”

“Found out that my grade school bully is now a stripper. Karma’s a bitch, although I always knew her as Rachel.”

“I love this oscillating fan four out of every twelve seconds.”

“‘I love you just the way you are.’-Billy Joel and other liars”

“If you’re gonna ‘be there with bells on’ I’d prefer you didn’t show up at all.”

Congratulations to Louis C.K. on his Emmy Wins!

Congratulations to longtime friend of the club Louis C.K. for bringing home not one, but TWO Emmy Awards last night!

Louis won the award for “Best Writing in A Comedy Series” for his FX sitcom Louie and “Best Writing for a Variety Program” for his stand up special Live at The Beacon Theater.

He’s wow’ed you all summer long on America’s Got Talent, now come see one of the most exciting comedians in America today, TOM COTTER perform live and in person at the Comic Strip!

Not only will he be doing one of his trademark hilarious sets, he will also be auditioning for CBS’s “The Late Show with David Letterman!” Is this the best summer of Cotter’s life? Maybe! Come out and support the hard-working joke smith tonight at the Comic Strip! Hey, he might even shake your hand!

NEW YORK, NY – September 13th, 2012 – The 7th Annual New York’s Funniest Reporter Show (www.nyfunniestreporter.com) will take place on Thursday, September 27th at 8:00 pm at Comic Strip Live (1568 Second Ave / bet 81st & 82nd) comedy club. It will feature six media professionals each doing five minutes of stand up comedy in order to raise money for the Humane Society of New York (http://www.humanesocietyny.org/). At the end of the night, a winner will be declared.

“This is one the most exciting lineups we’ve ever had. With the exception of our returning champion, all participants will be making their inaugural debut in the show.” Said Mark Goldman, New York’s Funniest Reporter Show Co-Producer. “It never ceases to amaze us how brave these individuals are and what they’re willing to do for such a worthy cause.”

All Media Inquires about New York’s Funniest Reporter Show can be directed to Ryan McCormick at (516) 901-1103.

You’ll never know what will happen on a Thursday night at the Comic Strip!

Last night, longtime friend of the Comic Strip Live!, DANE COOK stopped by to surprise our audience! Dane, who’s stand up records have sold millions of copies and who is one of only two comedians ever to sell out Madison Square Garden, is in town working on a new sitcom which he is starring in called “Next Caller.” It was great having Dane come by the club. Who knows when he will be unexpectedly dropping in next!

Robert Wachs, who founded The Comic Strip comedy club in 1975, has been in the entertainment industry for 49 years. Bob started his entertainment career as a theatrical attorney, after seven years as an associate, in the most prominent law firm in the United States. He left to start his own firm. Eventually, he and Richie Tienken got together and started The Comic Strip comedy club. They went on to manage Eddie Murphy for many years and produced many of Eddie’s hit movies, recordings, and projects. In fact, Bob wrote the story for Beverly Hills Cop II.

Bob eventually went on to manage Arsenio Hall and was a production executive on Arsenio’s television program. Twelve-years ago, Bob had an idea to produce a musical based on the works of his friend, Paul Jabara. Paul, who founded the Red Ribbon Campaign as a symbol of the fight against AIDS, won the academy award for the song LAST DANCE which appeared in the motion picture “Thank God It’s Friday.” Among Paul’s other hits are ENOUGH IS ENOUGH (No More Tears), IT’S RAINING MEN, THE MAIN EVENT, and LAST DANCE. Bob is happy to announce that a lab workshop of LAST DANCE will be produced for five performances at The York Theatre in Manhattan, September 21, 22, and 23. The director is Phil McKinley, the savior of SPIDER MAN on Broadway.

To purchase tickets or for more information, please visit http://www.yorktheatre.org/last-dance.html.

“It’s been a very very long haul but in the end, I think it will have been worth it.” —Robert Wachs

Tagged as The Last Dance

Watch Tom Cotter Get a Standing Ovation in the Finals of America’s Got Talent!